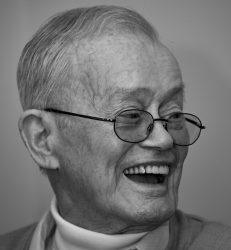 With great sadness we announce the passing of Rudolf (Rudy) Albert Parys.  Beloved husband of Christel for 59 years, father of Susan (Travis) and Monique (Robert) and Opa to Chelsea, Logan, Garrett and Georgia.  Predeceased by his mother Anna and father Gregor Parys.  Rudy was born in Beuthen Silesia in Germany on April 13, 1928.  He came to Canada in search of opportunity and a better life in the late 1950’s.  His first job was at Hamilton Television and Radio as a repairman, but soon after was hired by Bell Canada in August 1957 and worked there until he retired in 1991.  Rudy was never one to sit down and relax; he always wanted to keep busy.  He was a jack of all trades, Electrician, Mechanic, Plumber, Computer Technician.  If he didn’t know how to fix something he bought a book or looked it up on-line.  He loved photography, music, books, gardening and animals.  Even into his 90’s he was always taking pictures of his family and pets.   Upon his retirement he took up skiing, rollerblading and sailing.  He was a devoted family man and loved his Grandchildren to bits, ever so patient and always taking the time to teach them new things and tell them wonderful stories.  He will remain in our hearts forever. Miss you Dad!  In lieu of flowers the family asks that donations go to The Farley Foundation or the Juravinski Cancer Hospital in Hamilton.