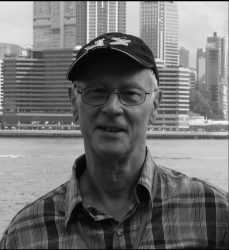 It is with great sadness that the family of Michael Hall announces his death after succumbing to dementia related illnesses on 30 April 2020. Michael will fondly be remembered by his wife of 28 years, Jean Findlay and her daughters, Wendy and Sheri, his four grandchildren, and his sister-in-law Sheila Brunies and her son Kristopher. Michael was born and raised in England and later moved to New Zealand where he became a civil engineer and then travelled the world working on nuclear and power projects including Korea, Nigeria and India. Michael will be remembered for his dry, sharp humour and remarkable stained glass creations. Michael is predeceased by his parents, Leslie and Mary Hall, and his first wife Muriel (nee. McGavin) Hall. Celebration of life service will be planned for a future date.