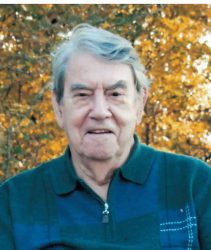 Passed away peacefully at St. Peter’s Residence at Chedoke on February 5, 2020 in his 99th year. Beloved husband of the late Sophie (nee Koczan). Loving father of Patricia (Ron) Greenwood, Allan (Gwen), and Robert. Caring grandfather to Jennifer, Jim, Dan, Kris, Karla and great-grandfather to Cecily, Katie, Ty, Meg, Sammi, Dray, Austin, Eden, Lauren, Elaina. Norm was born and raised in Hamilton. He joined the RCAF during W.W.II and spent a rather peaceful term stationed in Newfoundland. When he returned to Hamilton, he met beautiful Sophie and fell in love with her light heartedness and enthusiasm. After they were married, he worked at various jobs but eventually retrained for a career as a draftsman, which he always regarded as a well chosen move. He was a man who believed he could build or fix almost anything and proceeded to do so with consistent success. He enjoyed mulling over problems and finding innovative (and inexpensive) solutions. He loved photography and cameras and even had a brief and pleasurable few years making stained glass creations. Norm was known for his dry wit and clever sense of humour. He was also an avid reader – a self described lover of words and information. He spent many hours in his senior years browsing and reading on the internet, sometimes even buying new computers just because they were interesting challenges. He will be missed. Friends and family are invited to Turner Family Funeral Home, 53 Main St, Dundas, on Saturday, March 7th from 2 – 4p.m. for a Celebration of Life. Interment to take place at a later date. Donations can be made to the Canadian Cancer Society