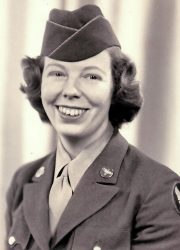 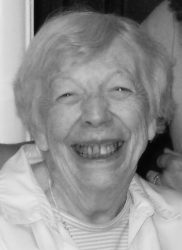 HENRY, Henrietta Margaret (nee Shaefer) – Retta passed away peacefully at Juravinski Hospital on January 17, 2020, in her 97th year. She was a loving mother to Chris, Frank (Coline), Brian (Naomi), Gina (Pat–predeceased), Joan (Stephen), Catherine–predeceased (Peter), and Teresa (Michael) and a caring grandmother to 13 grandchildren and 4 great-grandchildren. Retta was predeceased by her siblings Brian, Nancy, Ross, and Joan. She will also be sadly missed by many nieces and nephews. Friends and family are invited to Turner Family Funeral Home, 53 Main St, Dundas, Ontario, on Wednesday, January 22, at 2–4 p.m. and 7–9 p.m. A Funeral Mass will be held at St. Augustine’s Catholic Church on Thursday, January 23, at 10:30 am. The burial will follow at St. Augustine’s Cemetery, then a reception at the Air Force Club in Dundas from 12:30–3:30. Donations can be made in memory to Martha’s House or to the Campaign Life Coalition. Retta lived a full life. As a young woman, she traveled with girlfriends, served in the Far East with the US Army, and graduated from Marquette University, where she met her husband Frank. She loved children. Seven of her own wasn’t enough; she also cared for foster children, and through Birthright she helped countless pregnant women in need. Until a month before her death, Retta lived in her own second floor apartment, remained active in her church community, and was an avid bridge player. She will be missed by her many, many friends.