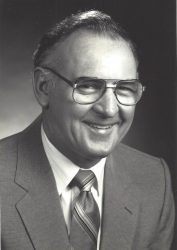 Guy Russell Hunt passed away peacefully at St. Peter’s Hospital, Hamilton, Ontario, on Wednesday, November 6, 2019. Born on June 28, 1930 and raised in Lynden, Ontario, Guy was never far away from his Copetown-Sheffield family roots. Guy was predeceased by his mother Hazel (nee Russell), father George, brother Carol, sister Barbara (Ed Olmsted) and sister Patricia (Bob Marshall). He was also predeceased by his in-laws Rev. George Cardy (Dilys), Clara Clare (Ed), brother in-law Ross and stepsister in-law Anna Lyn (Andrew). He is survived by his loving wife Helen (nee Cardy) of 69 years who was his devoted soulmate since grade school. He leaves behind his son Kevin and wife Lucy, along with grandsons Ryan and Anthony who were his pride and joy. He is also survived by his brothers and best friends who were always there for each other: Jack (Wilma – deceased), Bob (Joyce), Jim (Lois) and David (Jorie). He leaves behind his sister-in-law Barbara (Bill – deceased), stepsisters-in-law Susan (David – deceased) and Jackie as well as many nieces and nephews. Guy started his career as a carpenter for Smitty Construction in the late 1940’s working up to the role of lead foreman where he helped create many of the unique buildings standing along the Mountain Brow today. In the 1960’s, Guy started working for Dofasco as a millwright with Blast Furnace Mechanical as a Group Leader looking after steel construction in the Bayfront until he retired in 1987. Since his retirement, Guy put his talents to use and kept busy with wood-working creations that now he leaves behind. The family would like to thank the compassionate staff at both the Hamilton General and St. Peter’s Hospitals over the last few years. Special thanks and appreciation from the family to Dr. Richard Packer for his constant devotion and understanding care over the many years. A Service will be held at Turner Family Funeral Home, 53 Main Street, Dundas, on Saturday at 9:30 a.m. Interment to follow at Mt. Zion Cemetery. A time of fellowship at the Cattel Centre located next door to the funeral home will take place after the interment.