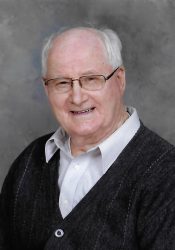 Passed away peacefully at St. Joseph’s Hospital with his family by his side on Wednesday, October 30, 2019. Predeceased by his first wife Betty. Dearly loved and missed by his wife Donna; children Colleen Shaw, Kathryn Black and Diane Payne (Art); daughter-in-law Marion Shaw; grandchildren Barbara, Donna, Laura, Gary, Mark, Pamela, Christopher, Michael and Laurel; step-children Brian and Elaine; 12 great-grandchildren and 5 step-grandchildren; Thomas “Jim” Shaw (Dorothy), sister Claire Lahie and sister-in-law Alice Black (Jim). Predeceased by his son Glenn; step-daughter Janet; brothers George Shaw (Patricia) and Clarence “Dude” Shaw; sisters Marion Allan , Margaret “Beth” Munro (Glen), and Mildred Mayberry (Bill); and brother-in-law Kenneth “Ken”. Don had numerous vocations throughout his life. He was a former employee of Bell Canada, a chicken farmer, was adept at using his hands and all kinds of tools. He enjoyed a good round of golf, was a member of the Rockton Lions club, an avid curler at the Dundas Granite Curling Club, and belonged to the Men’s Club and the ‘Thursday Afternoon Singers’ at St. Paul’s United Church where he was a long-time member. Special thanks to the staff at St. Joseph’s Villa, in Dundas, for the exceptional care given to him during his time there. In keeping with Don’s wishes, cremation has taken place. A celebration of Don’s life will be held at a later date. If you so wish, donations to St. Paul’s United Church, Dundas or a charity of your choice would be appreciated by the family.

“Earth has no sorrow that heaven cannot heal.”