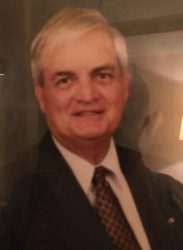 Ed West passed away peacefully on Sunday, October 13, 2019 in his 87th year. Ed was born in Woodstock on November 25, 1932, where he grew up with his four brothers, Jim, Sherman (predeceased), William (predeceased) and Bernard (predeceased). He is survived by his sister-in-law Carol and several nieces and nephews. After graduating from St. Jerome’s College in Kitchener, Ed attended St. Peter’s Seminary in London, Ontario after which he taught school for several years on St. Vincent Island in the Caribbean. On his return to Canada, Ed had a very successful career as a Supervisor for over 25 years with the Canadian National Railway. On his retirement Ed went on to serve his church, St. Augustine’s, in many ways including instructing and scheduling the altar servers for 20 years. For over 50 years Mr. West served his church and community in his adopted Town of Dundas, Ontario. He was on the executive and participated on many community organizations including the Dundas Public Library, St. Augustine’s Basketball League, Dundas Little League Baseball, Dundas Minor Baseball League, Dundas Minor Hockey Association and the Dundas Blues Jr. C Hockey Team. He was also a friend to those who needed a friend and a strong supporter of anyone he knew that was in distress or need. As a result of his contributions to the community, Mr. West was voted Dundas Citizen of the Year in 1982. Ed enjoyed studying Latin and Irish Gaelic, music, The CBC and travelling both here in Ontario and abroad to Rome, Italy and Dublin, Ireland. Visitation to celebrate Mr. West’s life will be held at the Turner Family Funeral Home, 53 Main Street, Dundas on Wednesday, October 16, from 6-9 p.m. Funeral Mass will be held at ST. AUGUSTINE’S CHURCH, 58 Sydenham Street, Dundas on Thursday at 11:00 a.m. Cremation to follow. A special thanks to George, George and Art and to the Nurses and Staff on Oak Grove at St. Joseph’s Villa. In lieu of flowers, donations to St. Joseph’s Villa Foundation, or the charity of your choice is appreciated.