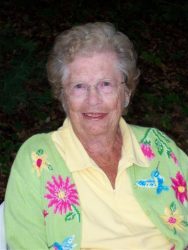 Mildred’s remarkable life came to a close this summer. She was in her own home, surrounded by the love or her family, as was her wish for her final departure. Mildred was born to Edith Muriel Riddell (nee Clark) of Montreal and Arthur Gourlay Riddell of Hamilton. She and her younger sister, Douglas Clark Hodge (d. 2019), shared the closest of sibling bonds for their entire lives. Friday evenings were spent with great howls of laughter shared with the Riddell cousins at their grandparent’s home in Hamilton. Mildred and Douglas spent their childhood summers with the Clark family in Manitou, Quebec and attended Camp Oconto, where Mildred gained her life-long love of the great outdoors. She was educated in Hamilton at Adelaide Hoodless Central Collegiate and attended business school after which she worked for a time in the offices of Canada Crushed Stone. Mildred became a Girl Guide leader in her effort to inspire and share with others, her love of nature. At age 14 she met Kenneth Baker Hodd at a Girl Guide–Boy Scout event celebrating a Royal visit. They became fast friends and sweethearts. When war was declared, Kenn enlisted as part of the Royal Corps of Signals. He asked Mildred to wait for him and so it was that they became engaged at age 18. Having earlier earned her St John’s Ambulance Certificate, Mildred was a volunteer ambulance driver during the war, while Kenn served in the Italian theatre. Following their long wartime separation, Mildred and Kenn were married in August 1945. They had four children; Jane (Paul Reble), Patricia (Henry Krukowski), John (Karen Siggs) and Elizabeth (Arlie Katzman). Mildred was the ultimate homemaker, her family being the fortunate recipients of her skills in sewing, gardening and particularly cooking. Her pies and butter tarts were The Best! Mildred’s life motto could well have been “fidelity and service to others”. She was a loyal wife and mother and a steadfast friend, keeping many of her schoolgirl friendships until death. The organizations she belonged to include, Red Cross, Big Sisters, Women’s Canadian Club and the IODE, of which she was a charter member (75 years).Through these and others, she actively supported many charities. Mildred was a life-long learner, always interested in current events, geography, history, theatre, the world of nature and politics (Question Period). Her broad interests encompassed preserving her garden harvest, knitting, sewing, antiques, cycling, hiking, badminton, bridge, water sports, boating, picnics and book club. She was a voracious reader of both fiction and non-fiction, including subscriptions to Majesty and Royalty magazines. In later years she used an electronic reader as her sight began to fail. Mildred enjoyed sharing digital photos and keeping in touch daily with her children and friends on FaceTime. One of her greatest passions was travelling. She was fortunate to have visited over 50 countries, often with her best friend Gerrie Warner, with Kenn and their friends and with her children up until her last year. Her atlas was well thumbed. However, her favourite place in the world was at the cottage that she and Kenn built on Georgian Bay, where the family spent the summers playing and working together with friends and neighbours. There Mildred would spend most of her time outdoors sharing her enthusiasm for swimming, canoeing, wildflowers, forest creatures and especially birds. Binoculars were always close at hand. Kind, loving, generous and fair, Mildred was always a lady whether in elegant outfits and pearls or bug suit and rubber duckies. Her genuine interest in the lives of others made her a very good listener. She had an acute memory, often choosing to remember the good things over the bad and was blessed with a mind sharp as a tack to the very end. In 2005, Mildred and Kenn celebrated their 60th wedding anniversary at the cottage. Mildred was a model of strength in the face of adversity, when in 2006, a rare disease suddenly took the life of our beloved Patricia, followed by the passing in 2008 at the family home of her dear husband Kenn. Mildred and Kenn both learned to fly small planes, on one occasion flying cross country together, from Hamilton to Inuvik, above the Arctic Circle. She was a member of the “Ninety Nines”, International Organization of Women’s Pilots. Is it a coincidence that in her 99th year, Mildred got her angel’s wings after a life so well lived? Family was everything to Mildred and she was everything to us. Mildred will be fondly remembered by Peter and Martha Hodge, Sandi McCormack Snively, Philipp Weinschrod, Erin, Henry and Mathew Kolodziej. Mildred’s family wishes to express their heartfelt gratitude to the wonderful caregivers from St. Elizabeth’s Nursing Care and Home Sweet Home for Seniors in Dundas. In lieu of flowers, Mildred’s family greatly appreciates donations to the charity of your choice or to the M. Patricia Krukowski memorial fund at St. Joseph’s Hospital Foundation, Hamilton, Ontario, in memory of Mildred C. Hodd. A Pictorial Celebration of Mildred’s Life will be held at the Dundas Valley Golf and Curling Club, on Sunday October 6, 2019 between the hours of 2-5pm. Cremation has taken place.