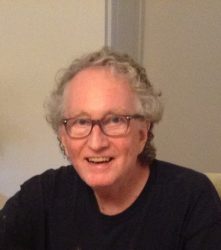 It is with profound sorrow that the family of Michael Burke-Gaffney announces his death on July 26th at the Dr. Bob Kemp Hospice. Michael died holding the hand of his greatest love, best friend and wife of 47 years, Jan. Michael said goodbye to his four children, so proud of the wonderful young adults they have become, who were devoted to him during his illness over the last two years. He leaves behind his deeply cherished children Joseph and wife Lynne, Andrew and wife Bree, youngest son Jesse, and his daughter and golfing partner, Emily. He is survived by and was reunited in great joy with his brother Brian and family of Nagasaki. He is predeceased by his parents, Beth (Sparling) and John Burke-Gaffney and by his beloved younger brother, Tim Burke-Gaffney, and dearest niece, Leah MacAdam. He leaves behind his beloved nieces and nephews. Mike worked for over 30 years as a journalist and editor for the Catholic Register, as Managing Editor at the Toronto Sun and Post Media newspapers. He loved his job and earned the respect and admiration of his colleagues. He also gave to the community as a president of the Hamilton Association for Community Living and as an assistant to his son, Jesse at the Good Shepherd Food Bank. His greatest love next to his family was his golf game. An excellent golfer, he loved to play and enjoyed his Sunday games with the guys. As a parent he was a model for us all. Two of his proudest days were the celebrations of Joe and Andrew on their wedding days to the two beautiful young women who joined our family in this past year. His devotion to his two youngest, Jesse and Emily was unbound. He endured the long commutes to work in Toronto over many years so his children could be included in their neighbourhood schools at the Hamilton Catholic School Board, a choice he never regretted. It is difficult to find the words to thank our dearest friends and family who have supported us with love and kindnesses through these last years. We are so much more because of you. Our gratitude goes out to Dr. Kapoor, Liz and everyone at the Urology and Renal Institute at St. Joseph’s Hospital , to the Juravinski Cancer Centre, to St. Joseph’s and St. Elizabeth’s Home Care, and to the LINH Palliative Care team. We are grateful to have had Michael at home up to the last few days of his life thanks to these supports. Michael spent his last days at the Dr. Bob Kemp Hospice, a place of peace and kindness and we are deeply appreciative of the support and sensitivity shown the family by everyone there. In spite of the toll taken on him by his illness, Michael remained steadfast in his courage, humour and love for life and everyone dear to him to the end. In lieu of flowers, donations to the Cancer Assistance Program of Hamilton would be greatly appreciated. A funeral mass will be held on Thursday, August 1st at 11 a.m. at St. Augustine’s Roman Catholic Church, 58 Sydenham St, Dundas, Ontario.