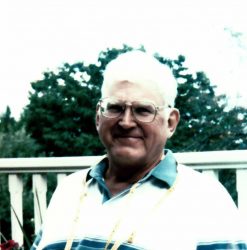 In his 84th year, peacefully at his home, Edward passed away on Thursday July 11, 2019.  During his remarkable life, he influenced and motivated innovation.  He was a Patent and Trademark Agent, with a long and distinguished career working for Westinghouse, G E Canada as well as his own practice.  When he was not in his office, you could find him working on his fruit trees, vegetable garden or working on his Volkswagen cars. He was an active member in his community with Rockton Agricultural Society and a supporter of the Arts in Hamilton.  Ed was a lover of music and sang for many years in the Burlington Welsh Choir and Canadian Male Orpheus Choir. Ed truly never recovered the loss of his wife, Frances Janet Oldham four years ago.  He was the proud father of Kym, Scott, Heather (Doug) Spence and Charlene.  His true joy, were his grandson’s, Gregory and Tyler Spence and Jacob Oldham.  He was the son of Ewart and Margret Oldham, brother to Jean (Jella) Nauta and late sister Ruth (Ritchie) Swan.  He was the brother in law to Bill Richardson, Noreen Richardson, Don and Lois Richardson and Peter and Laurie Sturm and many nieces and nephews.  His last four years of life where supported by some very special people but most of all Mark Pangowish and Bernadette Gamboa. It is because of their help, support and love for Ed that he had such a great quality of life. Visitation will be held at Turner Family Funeral Home, 53 Main Street, Dundas, on Tuesday July 16th from 2-4p.m. and 7 – 9p.m. Followed by a visitation on Wednesday July 17th at St. Andrews Presbyterian Church, 115 St Andrew’s Rd, Scarborough, at 11a.m. with a Funeral Service to follow at 12p.m.. Donations, in memory, can be made to Rockton Agricultural Society or the Kidney Foundation.