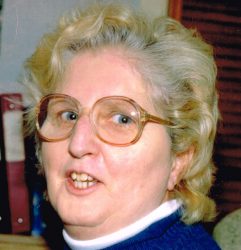 It is with great sadness that we announce the death of Barbara on June 27th ,2019. Barbara was born on July 27th , 1943 and resided in Dundas her entire life. Mourning her loss are her children Anne Patterson (Jason), Laura Thomas (Michael), David Patterson (Carla), Sharon Little (Aaron) and six grandchildren Isaac, Jesse, Tyler, Ryann, Ethan and Owen. Barbara was predeceased by her husband John (2015) and daughter Marcia (1986). Barbara was one of eight children and is survived only by her sister Joyce Moore. Throughout her life Barbara relentlessly challenged the expected norms, going back to school in her late thirties to master computers she began a long career with the McMaster School of Nursing. Diagnosed with Parkinson’s Disease in her early 50’s, Barbara faced this challenge with the same tenacity as she did with all aspects of her life. She used her education and connections to establish the Parkinson’s List, one of the first global communication platforms for people with the disease. In 1999 she received the City of Hamilton Women of the Year award for her efforts. In 2005 she was honored in New York City by the Parkinson’s Foundation with a Humanitarian Award for her dedication & passion. Barbara had an amazing sense of humour, sarcasm and integrity that will be remembered and cherished forever. We would like to give thanks to the wonderful staff at St. Joseph’s villa and to especially to Huegette, who kept our mom smiling every day. Friends and family are invited to Turner Family Funeral Home, 53 Main St, Dundas on Monday July 1, 2019 from 2-4 p.m. and 7-9 p.m.. A Funeral Service will take place at the funeral home on Tuesday July 2 at 10:30a.m. with a burial to follow. In lieu of flowers, donations can be made to Parkinson Canada.