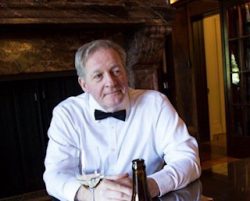 It is with great sadness that we announce the passing of Bill MacKenzie, 61, who passed away peacefully at Carpenter Hospice House Friday, May 10, 2019 after his courageous battle with cancer. He was a loving husband, father, and son, survived by his wife, Susan Ferrier, mother, Mary, and predeceased by his father, William (2017). Bill was a loving father to his children, Rachel, and Evan, and stepchildren; Gordon (Victoria), Matthew, Alexander, Dalton, and Connor. Bill is also survived by brothers: John, Alex (Laurie), and Rob (Stephanie) and nieces and nephews; Tyler and Liam, Elizabeth, Jennifer and Madison, Jack and Katie, respectively. Bill was a well-known product consultant with the LCBO, recently retired in September 2017, friend of the Dundas/Ancaster/Burlington community, and known for his kindness and generosity to others. He carried with him a passion for fine wines, well-aged cheese and meat, and the sport of rugby while leaving a lasting impression on any person who crossed his path along the way. Visitations will be commenced at Turner Funeral Home in Dundas on Tuesday, May 21, 2019 from 2-4 p.m. and 7-9 p.m.. In lieu of flowers, a donation in Bill’s name to the Ronald McDonald House Charities South Central Ontario would be greatly appreciated.