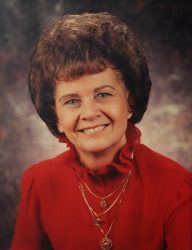 Mohoruk, Margaret, long time resident of Dundas, Ontario, died on Saturday, November 24, 2018 at St. Joseph’s Villa. She was 94. She was born Margaret Sinka on April 14, 1924 in Hamilton, Ontario. She had a successful career as an administrator at St. Joseph’s Hospital and the picture above was taken upon her retirement in 1991. Margaret married Nicholas John Mohoruk and together they had three sons, Gregory Mark, Nicholas John and Terrance Gary. Gregory and his wife Joette Cantafio, Nicholas and his wife Lynda Waine, and Terrance were all at Margaret’s bedside when she passed peacefully in her sleep at the Villa. Margaret is survived by her sons and her grandchildren, Nicholas Ryan Mohoruk, Loren Mohoruk, Aleksandar Sebestyen Mohoruk and Conrad Theodore Mohoruk, and her great-granddaughter Isabel Grace Goulding. She was predeceased by her husband, Nick in 1997. As per Margaret’s wishes there will be no visitation nor memorial services. Margaret will be interred at the St. Augustine’s Cemetery in Dundas, Ontario.  Memorial donations may be made in Margaret’s name to the St. Joseph’s Healthcare Foundation.