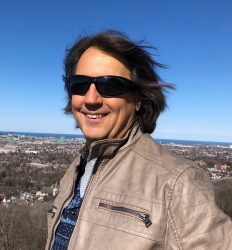 Left the stage far too soon, surrounded by family, at the Juravinski Hospital on November 6th at age 55 after a short but ferocious fight with pancreatic cancer. Beloved husband of Shelly. Devoted father to Bailey and Wilson. Remembered by siblings Sue, Bob and Peter; his entire band family; and all those he was a friend and mentor to. A good and righteous man who was full of witty comments and constant enthusiasm for the talents of those around him.

“The Mike Northcott After Party” will be held on Sunday, November 18 from 12pm until 6pm at the Boston Manor in Burlington. We welcome all who loved him to gather on this special day to share music, stories, and friendship in Mike’s honour.

Donations, in memory, can be made to An Instrument For Every Child.