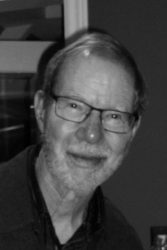 Lehmann, James (Jim) – passed away peacefully on October 13, 2018 at the age of 79 at Joseph Brant Hospital in Burlington after a courageous battle with Parkinson’s Disease. He was a graduate of the University of Waterloo, class of ’65 , in Mechanical Engineering. He will be lovingly remembered by his wife of 37 years Loretta (Booth). Son of the late Albert and Collette (Huber) Lehmann. Predeceased by his brother George (2014). Survived by his sister Mary (Garry) Leveck and sister-in-law Julianne. He will be missed by in-laws Roger and Bonnie Booth, Barbara and David Smye, Rosemary and Aaron Almas, and Warren Booth and Lorraine Dargavel as well as many nieces and nephews. A celebration of life will held at Turner Family Funeral Home, 53 Main Street, Dundas on Thursday, October 18th from 11:00 until the time of Jim’s Service at 12:00 p.m.  In lieu of flowers donations to the Parkinson Society, Southwestern Ontario would be appreciated.