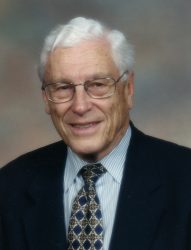 A professional optometrist, Bill practised for 48 years first with his father and then his cousin, Warren Currie, with offices in downtown Hamilton. Bill contributed to his community for 16 years as a member of the Dundas School Board and the Wentworth County Board, becoming chair of both.

Bill was active in the Masonic Lodge, the Scottish Rite and after his retirement the Probus Club of Hamilton. He loved jazz and swing music and through good seasons and bad cheered on the Hamilton Tiger-Cats. He followed politics as a “Bill Davis Progressive Conservative,” and wintered for 30 years in Naples, Florida where he made many friends. For the last several decades of his life, Bill enjoyed the daily companionship of a fine group of friends at Tim Horton’s. A Dundas man throughout his adult life, Bill said he always had a “warm feeling in his heart” when he returned there from trips.

Above all, Bill and Helen took special interest in the lives and careers of their children: Wendy (Jeffrey Simpson), Ian (Lynn Coslett) and Martha (Tom Knowlton). The entire family suffered a terrible blow when Ian suddenly passed away in 2015. Bill, a self-described “frustrated jock,” took great pleasure in watching Ian and four grandsons play football.

Special thanks to Rose Ortiz, the caregivers from LHIN, the staff at Amica and the local Veterans Affairs office for their kindnesses to Bill.