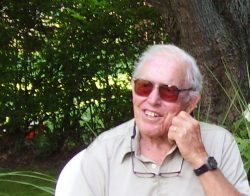 Wright , L. Marshall – It is with great sadness that the family of Marshall announces his death in his 93rd year, on Monday, February 5, 2018, in Dundas, Ontario. He is predeceased by the love of his life and wife of 70 years, Audrey (nee Headley) and by his precious granddaughter, Leah MacAdam.  He is the deeply cherished father of Sandy DeVoe (Phil), Jan Burke-Gaffney (Mike), Wendy-Marsha MacAdam (David) and Jennifer Wright.  Adored Grandfather to Wendy, P.J., Marshall (Erin), Joe, Andrew, Jesse, Emily and Hayley.  Adoring Great-Grandfather to Gavin, Alex, Connor, Ali and Wolf. Born in Ottawa in 1925, he is predeceased by his parents Margaret (Trodden) and Leithwold Wright, his brother and sister-in-law Garn and Eileen (Dunn) Wright, brother-in-law, Ron Armstrong and survived by his sister, Lois Armstrong and many nieces and nephews.  At age 17, Marshall became a sergeant pilot flying Tiger Moths but was too young to see action.  He married his high school sweetheart, a love story that never ended, and graduated Queen’s University.  He entered a distinguished career in the Canadian Armed Forces that included postings around the world and service in Korea in 1952-53 with his regiment Lord Strathcona’s Horse.  He went on  to command two helicopter squadrons, 403, Gagetown, New Brunswick, and 444 in Lahr, Germany.  He lectured at the Canadian Staff College in Toronto and piloted Prime Minister Pierre Trudeau before retirement as a Lt. Colonel.  He and Audrey fulfilled a dream to retire in the British Virgin Islands where they spent 17 years sailing, swimming and scuba diving. They returned to Canada in their 70’s to be closer to their children and grandchildren.  Marshall will be missed for his fantastic sense of humour, his adventurous spirit and his loving heart.  Special gratitude to the staff at Wentworth Lodge whose tender concern for Marshall’s comfort was greatly valued by his family.  Cremation has taken place.  A private family gathering will be held.  Donations to the Salvation Army would be greatly appreciated by Marshall and his family.

Oh! I have slipped the surly bonds of Earth

And danced the skies on laughter-silvered wings;