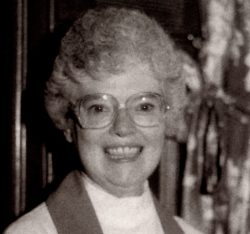 SHUPE, The Reverend Jean Elizabeth (Betty) B.A., B.S.W., M.R.E. – Peacefully on Thursday, January 18, 2018 in her 88th year at St. Joseph’s Villa, Dundas, Ontario. Loving wife of 65 years and best friend of Albert Shupe, cherished and devoted mother of David (Sheila), Greg (Jill), Tom (Andrea), Mary (Rick) and Nancy (Calvin).  Beloved grandmother of 13 grandchildren and 4 great grandchildren;  predeceased by her mother and father, Ruth and Austin Major and brother Don.  Betty led a life of service to others, beginning with three years as an elementary school teacher before leaving the profession to raise her family of five children. In addition, Betty was active with the Big Sisters Association and foster parent to three boys for several years. When her children were all in school, Betty returned to university to earn a combined Bachelor’s degree in Arts and Social Work.  This led to a second career, initially as the first certified social worker at St. Joseph’s Villa and later as their Coordinator of Resident Services for a total of eight years. Betty then returned once again to school at Emmanuel College, where she was ordained in 1987 as a United Church minister. She served as minister at Glen Morris United Church for three years, and then qualified as an Intentional Interim Minister and served at eight different churches throughout Ontario.  Over the years, Betty and Al travelled extensively throughout the world and enjoyed cooking and entertaining family and friends. The family would like to express their gratitude to the caring and compassionate team at St. Joseph’s Villa, Birch Trail Unit, where she spent the last year of her life.  Friends will be received at Turner Family Funeral Home (formerly Cattel, Eaton and Chambers) 53 Main Street, Dundas, Ontario, on Monday, January 22 from 6:00-9:00p.m.  Funeral service will be held at St. Mark’s United Church, 1 Lynndale Dr., Dundas at 11:00a.m. Tuesday, January 23. Reception to follow in the church hall.  In lieu of flowers, donations to the charity of your choice would be greatly appreciated.