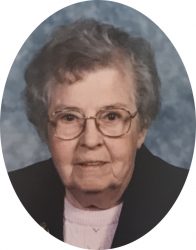 Wilcox, Helen (nee Beckerson) June 23, 1921 – December 23, 2017 – Peacefully at Wentworth Lodge in Dundas on December 23, 2017 at the age of 96. Predeceased by her beloved husband Lou. Also predeceased by her dear sisters Myrtle Smith and Shirley Haller (Carl). Survived and missed by her nieces Patti DeVries (Jack), Joanne Morphy (Geoff) and her cousin Jean Kerfoot. Also remembered by many nieces, nephews, cousins and dear friends.  Helen served her country by enlisting in the Canadian Armed Forces during World War II. After the war she became a teacher primarily teaching Grade 1 for her entire career. She loved to travel, loved her Toronto Blue Jays, had ice cream for dessert whenever she could and always had violets on her window sill. A Private Service and Burial was held.