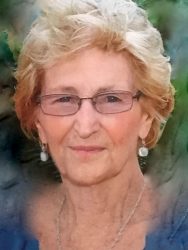 Putman, Doris (formerly Crewson; nee Roberts)  April 3, 1930 – Nov 1, 2017  It is with heavy hearts that we announce Doris passed away peacefully at the Brantford General  Hospital, on November 1, 2017 in her 88th year. She was surrounded by her cherished daughters.  Doris lived every day to the fullest, spending time with her family. She was the beloved wife of the late Bob Putman. Her children, grandchildren and great-grandchildren were her proudest accomplishment.  She was the devoted mother and admired role model to Carol Angle (Jack, predeceased), the late John Crewson (Karen), Donna O’Brien (Dennis), Debbie Ritchie (Raymond) and Cheryl LaPointe (Dave). Treasured Grandmother to David (Laurie), Lori (Jeff), Shannon, Shari (Doug), Josh, Jodie (Mike), Holly (Steve), Jacob, Connor, Morgan and Brooklyn and Great-Grandma to 11 adoring great grandchildren. Growing up in a large and loving family of 10, Doris was predeceased by her parents, 4 brothers and 2 sisters. She is survived by her sister Marg Rayner. Family is what mattered most in life to Doris and she has left a legacy of love that will be carried through the generations with the same kindness and generosity that she exemplified.  She was the best Mother, Grandmother and Great Grandmother anyone could hope for and she will be deeply missed by all those whose lives she touched. A visitation to honour her memory will be held at the Turner Family Funeral Home; 53 Main St, Dundas at 11:00 am on Monday, November 6, 2017. It will be followed by a celebration of life service at 1:30 pm. In lieu of flowers, the family appreciates donations to Canadian Blood Services ,  donation cards will be available at time of service.