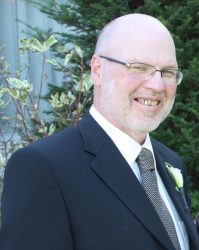 It is with deep sadness that the family of Gordon Frank Durrant Westoby announces his passing on Monday evening, August 14, 2017, at the age of 68. Gord was the beloved husband of Carolyn and ‘Best Dad’ of Kevin and Caroline, Jenny and Dave. He was the very proud Grandpa of Brayden, Aaron, Zachary, and Anna. Predeceased by his parents, Frank and Laureane Westoby. Brother of Pat (deceased) and Bob Raynsford, Bonnie and John Barrett-Hamilton. Son-in-law of Joan and Norm (deceased) Howard. Brother-in-law of Craig Howard & Joanne Fournier, Beth & John Genovese, Barb Warner & Dean Rivando. Gord will also be missed by many aunts, uncles, nieces, nephews, and cousins. Gord was a proud Dundas resident. Being a member of the Westoby family was enormously important to him as were his friendships at CaseIH. Deep appreciation to Chuck Howard and Steve Quiney for their support and friendship, and to Craig Howard for his unfailing care. Thank you to the many members of the health care disciplines for supporting Gord in these last years. Their skills allowed him to play with his grandchildren, and until just three weeks ago, to work in his garden and sit with his dog Abbie, scratching her ears. Thank you also to the pharmacy staff at the King Street, Dundas, Shoppers Drug Mart for their sincere care. Friends will be received by the family on Monday, August 21 from 2-4pm and 7-9pm at the Turner Funeral Home, 53 Main Street, Dundas. The service in honour of Gord’s life will be held at the funeral home on Tuesday, August 22 at 11am. Cremation has taken place. Donations to the Heart & Stroke Foundation of Canada would be greatly appreciated by the family.