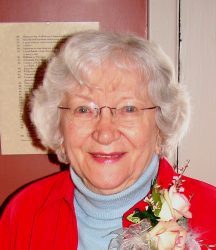 HOLLICK, Martha Teresa (nee Siwak) – It is with sadness that we announce that after a brief illness, Martha passed away peacefully at St. Joseph’s Villa in Dundas on Tuesday, June 27, 2017 at the age of 99. She was predeceased by her husband Joseph Sr. (2009). She will be sadly missed by her twin sons Joseph (Marilyn) of Dundas and John (Judy) of King City. She was a loving grandmother to Julie (Anthony) Herrington, Laura Hollick and Victoria Hollick (Attilio Braga), step-granddaughter Julie Cunningham, great grandmother to Sophia, Ella and Jonathan Herrington and Alessandro Braga, and step-great grandmother to Kate and Patrick. She was predeceased by all of her eight siblings and their spouses. She will also be missed by many other family members and friends. Martha was born on the homestead farm in Davis, Saskatchewan on January 30, 1918, the first born of nine children. By the time Martha was 10, she was helping her mother Nettie Siwak in the home by caring for her younger siblings, and her father John Siwak in the barn by milking cows. Sadly in 1928 her father John passed away and the Siwak family eventually lost their farm. Martha, her eight siblings and mother moved in with the Lisowski family (Nettie’s parents) for almost a year. Afterwards Martha and her siblings were placed in St. Patrick’s Orphanage in Prince Albert, SK with Martha staying the longest, almost four years. She completed her grade 8 at the orphanage but also learned her life-long work ethics and housekeeping skills. At 15, she became a nanny and housekeeper, followed by work as a waitress and cashier. She joined a women’s baseball team and attended dances in Prince Albert. It was at one of these dances that she met the band’s violin player, Joe Hollick. After Joe left Prince Albert for work in Hamilton, she joined him there in 1941 where they were married at St. Stanislaus Polish Church. During the war, Martha worked in a bomb factory in Hamilton, but in 1945 became a full-time mother and home-maker as she gave birth to twin sons Joe Jr. and John. Her numerous part-time jobs (and full time jobs after her sons were older) included being a waitress, picking fruit, crossing guard, operating a day-care in her home, and work at Diana Dolls Wear. Her leisure activities included gardening, especially her amazing rose garden, bowling, polka dancing, square dancing, volunteering at St. Eugene’s Church and the March of Dimes, babysitting grandchildren and  hosting amazing dinner parties for family, friends and visitors from Saskatchewan. However, Martha was so much more than the events listed above. She was extremely generous while never asking for anything in return, knew how to show love to everyone, made all welcome to her home, and was a terrific cook, not only with her tasty pies, perogies, cabbage rolls, and borsch, but she collected recipes her entire life trying them out whenever an opportunity arose. We will miss her loving spirit and never-ending sense of gratitude.  According to Martha’s wishes, cremation has taken place. A Celebration of Martha’s Life will be held on Saturday, July 15 from 11:30 a.m. to 3:00 p.m. at 35 Melville St. in Dundas. A private family burial at White Chapel Memorial Gardens will take place at a later date. Special thanks are gratefully extended to the staff at St. Joseph’s Villa (Rose Garden) for their kind and loving care of Martha. In lieu of flowers, it is suggested that donations could be made to St. Joseph’s Villa (designated for the Rose Garden), or that you create a special occasion or event to spend with your family, as family time is very precious.