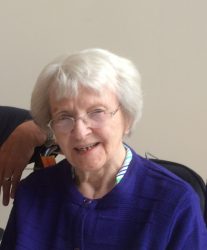 Mary passed away peacefully at Wentworth Lodge in Dundas on May 9, 2017, at the age of 101. Mary is predeceased by: her husband, Robert (Bob); her parents, Joseph and Tekla (Kathleen) Stechyshyn, her brother Walter; her sisters, Jenny and Stella (McCosky). She is survived by her sons, Malcolm (Lin) and Graeme (Joan), her grandchildren, Derek (Amy), Heather, and Iain (Jacinthe), and her great-grandson, Elliot.

Mary was born in Fort William, Ontario, in 1915. Her father had emigrated from Jereirzany, Galicia, Poland, and her mother from the Ukraine – Austria. Her family moved soon after to Hamilton, Ontario, where she, and her siblings, were raised. Mary graduated from Delta High School before taking post-secondary studies in office administration. She started working for Canadian Sterling Electric Company, and eventually became secretary-treasurer. When she married Bob, she became the accountant and office/business manager and co-owner for McMaster Pottery in Dundas, for close to 40 years, until its closure in 1988.

Over her long life, Mary was a devout and supportive wife, mother and grandmother. She was the driving force of her immediate family, and along with her sisters-in-law, maintained a strong extended McMaster family. She enjoyed being active, being a member of the Dundas Travel Club and Garden Club for many years. She always strove to continually increase her knowledge in many areas, and was never lost for words when asked for an opinion. Mary was a tireless worker both at the pottery, in her garden, at her cottage, and especially, in the kitchen, where she was known for her cooking.

Mary became afflicted with dementia in her mid 80s. She remained in her own home until her late 90s, and then moved to Wentworth Lodge, where she received excellent care and comfort over the past 3 1/2 years.

A remembrance/interment service will be held at a later date.