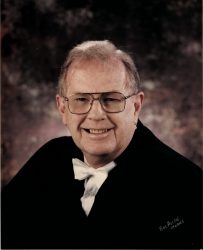 McNamara, Michael Alphonse – Died April 6th, 2017 peacefully at the age of 90 with his family by his side.  He was a longtime resident of Hamilton, Ontario and enjoyed his retirement years in Dundas, Ontario at the St. Joseph’s Estate condominiums.  He is survived by his loving wife Mary Ann of 62 years; children: Michael (Christina); Ann Marie (Alan Humphrey); Maureen Hubert (Glenn); Paul (Tammy); Colleen Sayer (Christopher), son-in-law John Pataracchia (Diana), grandchildren Rachel, Angela, Michael (Megan), John; Danny and Christopher (Ali); Benjamin; Alex and Caleb; Stephanie and Aaron; sisters Mary and Helen; his nieces and nephews, great nieces and nephews, great-great nieces and Aunt Halvetta Kelly.  Michael is predeceased by his parents John and Marie (Kelly), brother Jack, daughter Teresa and brother-in-law Michael Boyle.  Michael worked as a property manager at the Hamilton Housing Authority and following retirement as court registrar for the Ontario Court of Justice.  He was a devout Roman Catholic and passionately volunteered with the St. Vincent de Paul Society, as a Eucharistic Minister and an usher.  Many thanks to the staff of St. Joseph’s Hospital; Dr. Ayeni and staff at St. Joseph’s Villa; Dr. Singh and all at Turner medical.  The family is grateful for the supportive care and devotion shown to Michael.  Visitation will be held on Sunday afternoon and evening from 2-4 & 7-9 at the Turner Family Funeral Home, 53 Main Street, Dundas.  Mass will be held Monday morning at 10 o’clock at St. Augustine’s Roman Catholic Church, 58 Sydenham Street, Dundas.  Cremation to follow.  Donations to the St. Joseph’s Villa Foundation or Good Shepherd in Michael’s honour would be appreciated in lieu of flowers.  Michael’s enjoyment of the company of his family and many friends will always be remembered.  His life was a blessing and our memories a treasure.