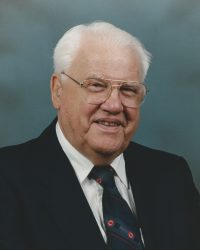 Brown, Arthur – A long-time Dundas resident, passed away March 29, 2017 in his 95th year with his family by his side.  He is survived by sons Timothy (Karen) and Philip, younger brother Garnet and many nephews and nieces.  Arthur was predeceased by his wife Helen, parents George and Anna, and nephews Peter and Mike. Born in Haileybury Ontario, Arthur was a survivor of the Great Fire of 1922. His mother stood in the cold waters of Lake Timiskaming holding baby Arthur as the town burned down.  As a boy, his family moved to Kirkland Lake during the 1930’s gold boom, and in his later years he would share stories of the town’s gold mines and the colourful gold rush characters.  In the 1940’s he enlisted with the Royal Canadian Air Force and proudly served during WWII.  Following demobilization, he joined Ontario Hydro and during his lengthy service worked at many of the company’s sites across northern and southern Ontario.  Upon retirement he was active for many years with the local chapter of the Hydro Pensioners Club.  He served his community through the Dundas Baptist Church, Little League, and Valley Lodge.  Arthur was a wonderful, sweet man; kind and humorous.   A beloved father, his gentle guidance will be deeply missed by his sons.  Visitation at Turner Family Funeral Home, 53 Main Street, Dundas on Saturday, April 22, 2017 at 2:00pm with a service following at 3:00pm.  Cremation has taken place.  Interment in Grove Cemetery next to his wife at a later date.