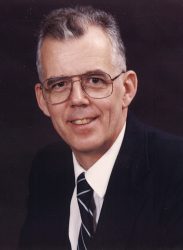 Gerrit (Gerry) VanderDussen, 81, passed away peacefully on February 12, 2017 at Island Park Retirement Home in Campbellford, with his family at his side. Gerry leaves behind and will be greatly missed by his loving wife of 58 years, Marilyn (Pettit), his daughter Sharon (Steve), his sons, David (Mary) and Lorne (Diane), and twelve grandchildren: Marianne, William, Iain, Elena (Emad), Livia (Mark), Emma (Avi), Aaron, Joshua and Sarah, and three great-grandchildren: Tessa, Ammar and Ada as well as extended family members and friends.   Pre-deceased by daughter Nancy.  In 1949, at the age of 13, Gerry immigrated to Canada from Holland along with his parents Herman and Lena VanderDussen and three siblings, Cathy (deceased 2016), Peter and Ada.  At the age of 15 he enrolled as an apprentice machinist at Bertram’s in Dundas to learn the trade that was to become his career.   Gerry worked briefly at McMaster University after completing his apprenticeship; then secured a career position at Stelco in Hamilton.  Gerry took pride in his work and continued to provide machining services from his garage workshop for family and acquaintances after retiring from Stelco.   Additionally, many hours were spent in volunteer time to provide support services to the local Canadian National Institute for the Blind (CNIB) workshop. Known for his gentle smile and commitment to family and community activities, Gerry lived a life of being an example to others.  Visitation and a service commemorating Gerry will be held Thursday, February 16th at the Turner Family Funeral Home, 53 Main St., Dundas, ON, L9H 2P7.  Friends will be received starting at 12:00; the memorial service will begin at 1:30.  A social tea will follow.  Interment will take place at Fairfield Church cemetery at 4:30. Donations in his memory can be made to the CNIB or to a charity of your choice would be appreciated.