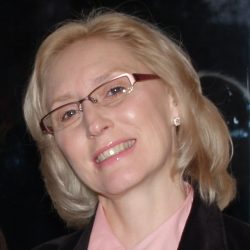 Laurin Diane Kerr –  Laurin, just 4 months shy of her 60th birthday, died suddenly in her sleep at home in Dundas on December 26, 2016. She was was predeceased by her father and mother, David and Anna Marie Kerr and her brother Brian Kerr. She is survived by her devoted husband of 28 years Ron Belcher, sons Lance Gallagher, Jamie Gallagher, his wife Melanie and grandchildren Keenan and Haylei, Adam Gallagher, his wife Michelle and grandchildren Cole and Scarlett; step-sons Rob Belcher, his wife Rachel and grandchildren Geoffrey, Hayden and Ellie, Chad Belcher, his wife Elaine and grandchildren Bethany and Curtis; brother James Kerr and his wife Jane; sister Anne Marie Joyce, her husband Danny, nephews Alex and Russell and niece Andrea; brother-in- law Bob Belcher and his wife Peggy. Laurin and Ron enjoyed over 30 years together, taking trips on Ron’s touring motorcycle, going on canoe adventures, skiing, hiking with their dogs MacKenzie, and later Lola, sharing time together at live theatre, restaurants, movies, weekend escapes and as spectators, or in Laurin’s case as a participant, at horse shows. Most particularly Laurin relished the time she was able to spend with her sons/step-sons and daughters-in-law and especially the nine grandchildren at the many family gatherings. Laurin’s singular personal passion was equestrian in particular the discipline of dressage. She would take green, young horses and train them to exceptional levels all the while improving her own riding skills. She entered many competitions in her category of rider/horse combination and almost without exception came away with the top red ribbon in her events. Laurin was an exceptional woman who consistently put everyone else’s needs above her own no matter what the situation. She was a loving and caring wife, mother and grandmother who had empathy and compassion for others beyond what words can describe. She constantly gave of herself both emotionally and financially to better the lives of her children and grandchildren. Laurin was a very private person and at her wish there will be no public funeral or visitation. A private gathering will be held in the near future so that her family can share their memories together and bid a final farewell. In lieu of flowers a donation in her memory to her favourite charity World Vision would be appreciated.