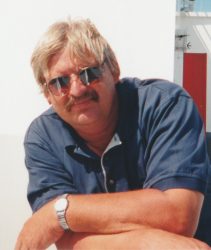 Cizikas, Vincas (Vince) Albertas – 61, of Lynden, Ontario, passed away unexpectedly in his sleep on the morning of December 8, 2016. Vince was a big guy with a big heart. A devoted husband to his beloved wife, Irene, of 27 years, he worked tirelessly to provide for his family; a family he loved and would do anything for. Quick with a joke and quick to tease, he could brighten a room with his larger than life personality. A straight talker who always told you what he thought and told it like it was. If you didn’t like it, well…  Vince spent nearly his entire career as a driver. From TTC buses to transport trucks, he could drive pretty much anything.  One of his proudest accomplishments was being recognized for 10 years of service as a volunteer firefighter with the Burlington Fire Department. Living out a childhood dream, he drove a fire truck on numerous calls, fighting fires with his colleagues at Fire Station #2.  When work was done he was a master of relaxing. With beer in hand and a beloved dog close by, he could while away the hours telling stories and shooting the breeze. Life was to be enjoyed. A favourite motto was “Why do today, what you can put off till tomorrow?”  He loved fishing with his dad, playing darts, watching the Jays and making fun of the Leafs. When will they be good? “Neeeext Yeeeear!”  Vince was a large man who had an even larger impact in the lives of many people. He will be dearly missed.  Vince is predeceased by his parents Barbara and Albertas Cizikas, and is survived by his wife Irene, daughter Sonya (Gary) Mackin and their children Alec and Josh; his son Trevor (Christine) and step-son David (Jayne) Whyte; his sister Vanda (Bobby) Slaney and their family, and his brother Peter and his family.  A remembrance will be held on Saturday, December 17th at 2 p.m. at the Lynden Legion Hall, 206 Lynden Rd., Lynden, ON. L0R 1T0.  In lieu of flowers, donations in memory of Vince can be made to the Ontario SPCA.