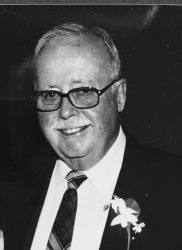 LENNIE, Robert Martin -December 20, 1926 – November 28, 2016 – After one long, hard, last battle with Alzheimer’s Disease, Bob died peacefully at St. Joseph’s Villa in Dundas, surrounded by family. Survived by his beloved wife of 64 years, Jean, and their children, Ian (Lyne), Bruce (Sydney) and Alison. He was the proud and cherished grandfather of Aidan (Gabrielle), Leif and Nina; Kristina and Andrew; Sarah, Patrick and Georgina. And the slightly astonished great-grandfather of Lars. The only child of Reta L. (nee Jerome) and John D. Lennie, Bob was born in the Casa Maria Maternity Hospital (St. Joseph’s Hospital), Hamilton and raised in Dundas, where he would reside for over 88 of his nearly 90 years. Bob attended Dundas Public School and, during 1939-40, Ottawa Senior Public School. He left Dundas High School to work as a labourer at the Dundas Quarry of Canada Crushed Stone. Eventually he progressed to salesman, then Sales Manager, and to Vice President, Marketing & Sales with the parent firm Steetley Industries. He served as President of the Aggregate Producers Association of Ontario in 1977-78. Bob had lifelong enthusiasms for horses and for sports, the Hamilton Tiger-Cats in particular.  He and friend Jack Woodley coached the Dundas High School boys’ basketball team to a COSSA championship in 1956.  He was a continuous member for over 50 years of both the Dundas Valley Golf and Curling Club and the YMCA, participating in hundreds of weekday noon-hour fitness classes at the Hamilton Downtown Y. He was a longtime Rotarian (awarded a Paul Harris Fellowship in 1992) and served on the Dundas Board of Park Management for several years (as Chairman in 1967-68). He was a lifelong member of St. Paul’s United Church. Through his work as a “rock pedlar”, as well as these many other pursuits, he and Jean made many lasting friendships. At his core Bob was a Dundasian, though he never used the word. The boys who were his friends in his youth – the surrogate brothers with whom he played lacrosse, basketball and football – remained his closest friends for life.  Jake and Ron Knowles, Norm Westoby, Len Couldrey, . .  He was the last of them. The family would like to thank the staff at the Orchid Garden, St. Joseph’s Villa for their kind, patient and attentive care. Cremation has taken place. The family will receive friends at the Turner Family Funeral Home, 53 Main St., Dundas on Friday, Dec. 2, from 2:00 to 4:00 p.m. and from 6:00 to 8:00 p.m. Funeral service will be held at the same location on Saturday, Dec. 3 at 11:30 a.m., with a reception to follow. In lieu of flowers, memorial donations to the Alzheimer Society of Ontario, 20 Eglinton Avenue West, 16th floor, Toronto M4R 1K8 or the Hamilton Downtown Family YMCA, 79 James Street South, Hamilton L8P 2Z1 would be appreciated.