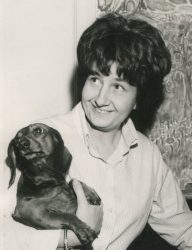 Gerda Aleida Maria de Vries, nee Nieuwenhuizen, was born in Nijmegen, Holland on October 23, 1924, and passed away suddenly at Wentworth Lodge, October 10, 2016. In death she joins her husband Jacob Peter de Vries, her son Derek Jan de Vries and a menagerie of dogs, birds, foxes and raccoons, all of whom she looked after with love. She is survived by her daughter Charlotte and much loved son-in-law Richard England, and by George and Pippa.  Having survived the war in Holland and (as a prisoner) in Germany, Gerry came to Canada with her husband in 1955 and did many different things to make a new life in a new country. Trained in ancient Greek and Latin, she was by turns a translator, a golf club manager, a rather too honest real estate agent, and a veterinary assistant. She devoted her life to God, art, animals, and her children. She spent her life painting, making beautiful things and loving others deeply. She was brave, creative, occasionally fierce, often hilarious, unbelievably loyal and deeply religious. She was a blessing in the lives of those of us who loved her and we will miss her more than words can say.  In her later years Gerry Maria lived at Wentworth Lodge in Dundas.  We are deeply grateful to those members of staff who took the time to get to know her, winning her heart and lightening ours with their generosity and affection. We would also like to thank Linda McSevney who has been a wonderful friend to all of us. Love is indeed patient and kind, and it is never forgotten.  A visitation will be held on Thursday, October  13 from 7-9 p.m. with Trisagion Service scheduled for 7 p.m. at Turner Family Funeral Home, 53 Main Street, Dundas. The funeral will be held on Friday October 14 at 11 a.m. at St. Demetrios Greek Orthodox Church, 22 Head Street, Hamilton with interment to follow at Woodland Cemetery in Burlington. In lieu of flowers, donations may be made to the Hamilton SPCA.