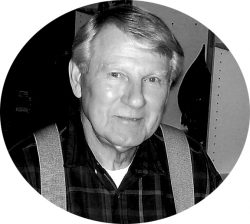 Tratch, Henry Augustine – Passed away peacefully after a brief illness on Thursday, August 4, 2016 at the Juravinski Hospital. Devoted husband of 55 years to his beloved wife Linda.  Cherished father of Leslie (Michael), Laurie (predeceased) (Alan), Holly (Jamie).  Loving grandfather of Lindsay, Eric, Cynthia, Daniel, Evan, MacKenzie, Connor and Braden.  He was the youngest of nine children and is survived by his sister Helen in Saskatchewan.  Henry was a Firefighter for the City of Hamilton for over 30 years.  He was an avid bowler and was inducted into the Hamilton 5 Pin Bowling Hall of Fame in 2012.  Friends will be received by the family on Sunday afternoon and evening from 2-4 and 7-9 at Turner Family Funeral Home, 53 Main Street, Dundas.  Funeral Service to be held at ST. PAUL’S ANGLICAN CHURCH, 1140 King Street West, Hamilton on Monday at 11:00 a.m.  Interment White Chapel Memorial Gardens.  In lieu of flowers, donations can be made to the Juravinski Cancer Centre.