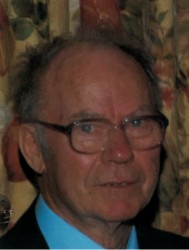 Passed away quietly on March 25, 2016, in his 91st year, at Wentworth Lodge, Dundas. He was the loving father of Jerry (Ann) and Julie. Beloved grandfather of Tara (Josh), Astra (Steve), Hayley, Brittany (Mike), Gage, Larah and Real. Brother of Donald and Willard. Predeceased by his wife Jean Wright (Patterson) (1997). Predeceased by his parents Richard and Iva, and siblings Howard, Gordon, Dorothy, Bernice and Phyllis. Ken was born in Inverness Quebec but was a long time resident of Dundas where he worked at Westinghouse and later became a well-recognized employee at the Dundas Public Utilities Commission (PUC). He was known among the local community as someone who would serve and help others. Cremation has taken place. The family will receive friends at TURNER FAMILY FUNERAL HOME, 53 Main Street. Dundas – Tuesday, March 29, 2016 at 7-9 pm. A service to celebrate Ken’s life will be held at the ST. MARK’S UNITED CHURCH, 1 Lyndale Dr. Dundas, on Wednesday, March 30, 2016 at 1 pm. For those who wish, memorial donations in Ken’s name may be made to the charity of your choice.