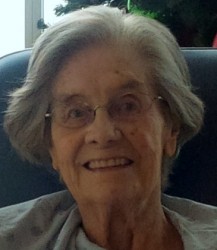 Peacefully at St. Joseph’s Villa on Wednesday, February 24th 2016 in her 90th year. Daughter of Will and Doris Garland she was the eldest of 5 children who grew up in North Ormseby – near Middlesbrough in north east England.   Monica talked often and fondly of her two brothers and two sisters, and her childhood years:  of having the chance just to go to, and finish, school; of her social memories as a member of the North Ormesby Methodist Church youth group; of the times with her second Mum and Dad when evacuated to Pickering in North Yorkshire during the Second World War.  In the years following she served as a WREN in the armed forces – more stories and more fond memories.  Married to Bill Elliott in 1949 they raised two children – Glynis and Andrew in Marton, England.  In 1966, as did thousands of other families at that time, they left England and emigrated, settling in Ancaster, Ontario Canada where they built a happy, successful, loving family life together for themselves and their children.   They believed in their great good fortune and became Canadian citizens.  Monica worked for many years as an office manager at the CNIB when it was located in West Hamilton.  Bill and Monica were avid ballroom dancers for most of their adult lives, both in England and Canada, finishing third in the Canadian Amateur championships in the early 1970’s.  In later years they became equally avid golfers and curlers where they were members of the Dundas Valley Golf and Curling Club.  They had friends everywhere, most recently in their final home together at Saint Joseph’s Estates in Dundas, Ontario.  Survived by Sisters and In-Laws Ann, Marie, Bea (James); Grandchildren Paulette (Greg), Michelle, Kathleen (Jamie), Robert; Second Mother to Kristine, Sonia (Ian), Pauline, Michael; Great Grandchildren Ellie and Grayson; Nieces and Nephews; John and Gillian; John and Raymond; Stephen; David, Susan, Julia, and Jane; Pamela and Janice; Anne and Robert.  Son Andrew: “Deep down Mum was the most loving, caring, thoughtful, consistent person I have ever known.  She always maintained a wonderful, wry sense of humour.   None of life’s ups and downs stopped her”.   Monica left behind so very many friends everywhere.  Sadly we will all miss her; fortunately happy memories will live on in each of us.