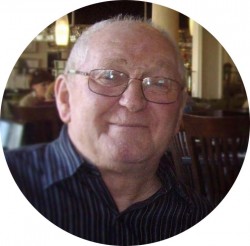 With great sadness we say goodbye to Gordon also fondly known as Dad, Grandpa, Great-Grandpa and friend to so many. After a long struggle with the effects and challenges of diabetes he passed from this life into the presence of God at age 86, on Friday, January 8th, 2016. Left to mourn are his sons Barry Gordon (Diana) Hurren, Terry (Gladys) Farrow, and daughters Kimberley (Roland) Farrow LeJambe and Vicki Farrow (Randy Griffiths). Son of the late Robert and Olive Hurren of Campbellville. He will also be sadly missed by his grandchildren Tamara, Jonathan, Adam, Trevor, Sydney, Ashley, Rachel, Khristel, Aimy and 7 great-grandchildren.  Survived by his brothers Harold, Lloyd and sisters Anna and Audrey. He was predeceased by wife Jacqueline Hurren, daughters Susan Hurren, Tracey Farrow, brother Russ and grandson Keith Farrow. Viewing and visitation will take place at Turner Family Funeral Home, 53 Main St. Dundas on Wednesday January 13th from 2-4 pm and 7-9 pm. Funeral and luncheon will follow at 11:00 am on Friday, January 15th, 2016 in St. David’s Presbyterian Church, 132 Main St N, Campbellville ON. We welcome all family and friends to celebrate Gordon’s life!  In lieu of flowers, donations to the Canadian Diabetes Association would be appreciated by the family.