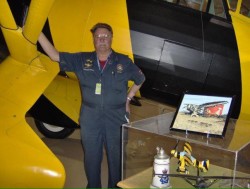 Livens, Douglas Anthony – It is with deep sadness that the family of Douglas Anthony Livens announce his passing on October 27, 2015 in his 83rd year. He will be greatly missed by his loving wife, Sheila White-Livens; his daughter, Jean Horst (John) and his step-children, James Coe (Sandra) and Heather Goulet (Charlie). Douglas is also survived by 4 grandchildren: Russell, Holly Gregory and Robert; and his faithful fur baby, Max; as well as many family members in the U.K.  With a passion for aviation, Douglas took to the skies every chance he could. When he was no longer able to fly he became an aviator on the ground thanks to the Canadian Warplane Heritage Museum where he volunteered for many years. Douglas was honoured to be a 32 Degree Mason during his lifetime membership with Electric Lodge #495.  A celebration of his life will be announced at a later date. Donations to the Warplane Heritage Museum would be appreciated by the family.
“….and if I’m flying solo, at least I’m flying free.”