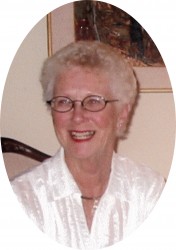 May 9, 1935 – August 25, 2015
With sadness we announce that Beverley peacefully passed away on August 25, 2015 at the Wentworth Lodge where she had been lovingly cared for.  She leaves Ivan, her best friend and husband of 53 years, her son Jeffrey and sister-in-law Sara Lawrence (Ron), her brother Herb (Jane), nephews and cousins.  Bev was born in Montreal, Quebec.  The family moved to Granby before moving to Hamilton in her teen years.  She graduated from Westdale Secondary School and worked in the office of Burlington Steel before her marriage to Ivan.  She was a stay at home mom where she honed her domestic skills.  With Ivan she was a past member of the Dundas Golf & Curling Club.  She enjoyed both curling and golf.  Beverley was an active member of the Dundas Garden Club and Ikabona Society.  She will be missed by the members and especially her good friend Ruth Watson.  In later years, Beverley assisted Ivan in his Podiatry practice in Hamilton and Oakville.  They enjoyed entertaining their many friends in their home and cottage at Southampton where she also volunteered at the Southampton hospital and taught line dancing at the Community Centre.  She was predeceased by her son Christopher Paul, her parents Bert and Thelma (Gagnon) Lock and in laws Francesca and Aladino Bucci.  Our thanks to the staff at Wentworth Lodge (Maple Lane Section) and Dr. Scott Nash for their exceptional care.  There will be a Funeral Mass at ST. AUGUSTINE’S CHURCH, 58 Sydenham Street, Dundas on Saturday August 29, at 10 a.m.  Cremation has taken place.  Interment at Holy Sepulchre at a later date.  In lieu of flowers, memorial donations may be made to Wentworth Lodge, Alzheimer’s Society or a charity of your choice.  A Celebration of Life will follow at the Church Hall after the service.