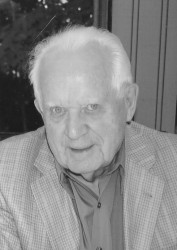 Weismiller, Frederick George – Quietly passed away at age 92 on June 26 at Hamilton General Hospital in the company of loved ones as a result of a sudden stroke the previous day. Predeceased by his first wife Mavis (Foell) and survived by his second wife Anneliese (Hampel), daughter Jana(Gerald Roppelt), and son Jeff (Laura Charles). Fred will also be missed by Pat Weismiller, Lisa and Chris Hempel and sister Ruth Watson and her family, as well as his grandchildren Brian, Jennifer, Shawn, Rhiannon and Brendon and great grandchildren Casey, Addison and Callie. Fred grew up in Elmira Ontario, spent the war years as a RCAF navigator and following a chemical engineering degree from Queen’s University worked for the Proctor and Gamble Company in Montreal and Hamilton until his retirement. He was very active in his church, and enjoyed the sports of curling and golf throughout his life. Visitation at Grace Lutheran Church, 1107 Main St. West, Hamilton, at 10:00 am Tuesday July 7, followed by the service at 11:00 am. and interment at Grove Cemetery, Dundas. As expressions of sympathy, donations may be made to the Heart and Stroke Foundation, or Grace Lutheran Church, 1107 Main St. West, Hamilton