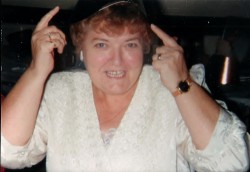 Jones, Margaret “Pearl” (nee Reilly) – It is with great sadness that the family of the late Margaret (Pearl) Jones announce her passing at Hamilton General Hospital on Wednesday, June 3, 2015 at the age of 78.  She will be lovingly remembered by her husband, Frank.   Loving mother of Frank, Jr. (Kathy), Carol-Ann (Gary), and David (Shannon).  Daughter of the late Alec and Winifred Reilly and dear sister of Winifred Kelly and the late Alec Reilly Jr. Devoted grandmother of Ashley (Trevor), Natasha, Grace, Halle and Liam and great-grandmother of Mason.  Friends will be received by the family on Friday afternoon and evening from 2-4 and 7-9 p.m. at the Cattel, Eaton & Chambers Funeral Home, 53 Main Street, Dundas.  Funeral Mass to be held at ST. AUGUSTINE’S CHURCH, 58 Sydenham Street, Dundas on Saturday, June 6 at 1:00 p.m.  Cremation has taken place.  As expressions of sympathy, donations may be made to the Heart & Stroke Foundation.