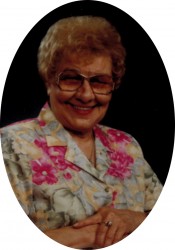 Hannigan (Gravelin), Margaret (nee Skalazoob) – Peacefully in her sleep at St. Joseph’s Villa on Sunday, March 8, 2015 in her 91st year. Wife of the late Merle Hannigan and Roland Gravelin. Loving mother of Cheryl Gravelin McQueen (Nairn). Loving grandmother of Mark (Jodi) and their daughters Evan and Blake and David (Andrea) and their sons Matthew and Ethan. Special aunt to Gailynn Smith (Don), Sandra Staniland (Doug, deceased), Terry Anderson, Heather Pawlinsky, Hettie Pawlinsky, Maxine Zamzow (Gordon), Twylla (Andy) McKendry, Pam, Jim (Eileen) and Bob (Judy) Waechter. Predeceased by her sisters Neva, Christine, Mary, Sadie and Elsie and her brothers Alexander and John. Margaret was a devoted employee of Sears Canada for over 30 years and a member of the Veterans Service League. She was also a very devoted fan of the Toronto Blue Jays. To celebrate Margaret’s life, we invite family and friends to share memories of her at a gathering at the Cattel Centre, 45 Main Street, Dundas (next door to the funeral home) on Wednesday, March 11 from 10:00 a.m until 12:00 p.m. Those who would like to join us, a eulogy commemorating Margaret’s life will begin at 11:00 a.m. In keeping with Margaret’s wishes, cremation has taken place and a private interment will be held by family. In lieu of flowers, donations to the Veterans Service League, 1473 Main Street East, Hamilton, would be appreciated by the family.