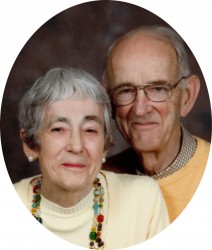 Thompson, James Ian Alexander – Peacefully in his sleep on Saturday, March 7th, 2015, at St. Joseph’s Hospital in his 89th year. Beloved husband of Averil, dear father of sons David of Stratford and Simon of Toronto, cherished father-in-law of David’s wife Kim, dearly loved Grandpa of Megan and Gillian and brother of Isobel (deceased). Ian was born in Northern Ireland and graduated from Queen’s University, Belfast. He married Averil Morrison in 1956. In 1968 he and his wife, with their two young sons, emigrated to Canada, where both Ian and Averil worked at McMaster University for approximately 23 years. He will be sorely missed by family and friends, especially those connected with St. Mark’s United Church (where he was a member of the Senior and the Bell Choir), Symphony on the Bay (where he played his violin) and the Probus Club of Dundas. Former member of the John Laing Singers. Cremation has taken place. Visitation at Cattel, Eaton & Chambers Funeral Home, 53 Main Street, Dundas, on Friday, March 13th from 2-4 and 7-9 p.m. Family and friends are invited to a celebration of Ian’s life to be held at ST. MARK’S UNITED CHURCH, 1 Lynndale Drive, Dundas on Saturday, March 14th, 2015 at 11 a.m. Reception to follow. In lieu of flowers and as an expression of sympathy, the family would appreciate donations to St. Mark’s United Church or the Canadian Cancer Society.