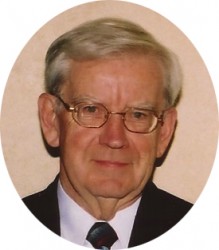 McNamara, Neil – Passed away peacefully, after a period of declining health, at St. Joseph’s Villa, Dundas ON, on February 25, 2015. He was the loving husband of Bernadette McNamara (Tochor) for 62 years (deceased February 14, 2015), and dear father of Paul (Rosemary), Kerry (Janis), Daniel (Laura). Loved grandpa of Colleen, Kathryn, Lorena, Jaren and Joel, and great grandfather to Ellie. Neil (Cornelius), is predeceased by his parents Ellen and John McNamara. He is survived by his brother Reverend Victor McNamara, and predeceased by brothers Tom (Mabel), Frank (Helen) Mike, Dennis (Helen) Gerald (Lois) Leonard (Sally), and sister Aileen (Murray Morrison). Neil (Cornelius) McNamara was born in West Luther Township, near Arthur, ON, on May 4, 1929. His family were farmers, and later lived in Arthur. After the death of his father, Neil and his mother moved to Hamilton to be nearer to other family. Neil attended Cathedral Catholic High School and eventually took a job with A&P Food Stores. It was while working with A&P in Port Colborne ON, that he met Bernadette Tochor, who also worked at the store. They were married in 1952 in Niagara Falls. After managing the A&P store in Tillsonburg ON, they returned to the Hamilton area. Neil managed the stores on York St., Upper Paradise Road, and for many years in Dundas. Neil was a devoted husband, and a loving father. He enjoyed taking care of their home in Ancaster, and was a master of carpentry, repairing appliances, etc. He was active in many aspects of St. Ann’s Parish including the Men’s Club and was the treasurer in the Boy Scouts group. Neil served, with great pride, on the Board of Directors for St. Joseph’s Villa during the 1990’s, Neil and Bernadette were avid campers and toured Canada and the United States with their trailer. They also enjoyed exploring Europe, the Caribbean islands and Mexico. Neil and Bernadette were members of several card clubs in their retirement years and they also spent many years square dancing. Neil was a president of St. Augustine’s Catholic Church Senior’s Group. Special thanks go to the staff of St. Joseph’s Villa for their continuing care of Neil. The Visitation will be held at Cattel, Eaton & Chambers Funeral Home at 53 Main Street, Dundas ON, from 3-5 and 7-9 pm on Friday February 27, 2015. The Funeral Mass will take place at ST. AUGUSTINE’S CHURCH in Dundas on Saturday February 28, 2015 at 10:00 am. Burial will take place at St. Augustine’s Cemetery, 65 East Street South (off South Street) in Dundas. Reception to follow at Dundas Museum , 139 Park St. West, Dundas. In lieu of flowers, sympathy may be expressed through donations to St. Joseph’s Villa.