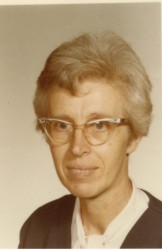 LeWarne, Alice Elizabeth – died peacefully on February 18, 2015, at Idlewyld Manor, Hamilton, Ontario at the age of 97 years. She was born on September 26, 1917, the second daughter of George and Winifred LeWarne, in Mount Forest, Ontario. She is predeceased by her sister, Jane (1992). She graduated from Stratford Teachers’ College and from Queen’s University, Kingston, and taught for 34 years, primarily for the Hamilton-Wentworth Board of Education, before retiring. Betty was an avid bird watcher, a weaver, an amateur photographer, painter, an extensive world traveller and a maker of Cloisonne jewellery. She was honoured for her work by the Artisan’s Guild and by the Field Naturalists of Hamilton area. She will be sadly missed by several cousins in Jarvis, & Peterborough, Ontario, Vancouver, Lethbridge, Calgary, ( Alberta), and in Palo Alto, California, as well as many friends. There will be a Memorial Service to honour her life on Friday, April 10, 2015 at Binkley United Church, 1570 Main St. West, Hamilton, followed by interment in Little Lake Cemetery in Peterborough, Ontario on April 11, at 11:30 a.m. In lieu of flowers, donations may be made to Idlewyld Manor, 449 Sanatorium Road, Hamilton, ON L9C 2A7, Binkley United Church, 1570 Main Street West, Hamilton, ON L8S 1E8 or Frontier College, 35 Jackes Avenue, Toronto, ON M4T 1E2.