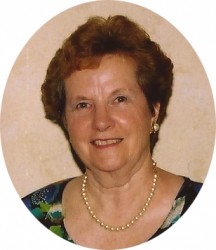 McNamara, Bernadette – Passed away peacefully, after a period of declining health, at St. Joseph’s Villa, Dundas ON, on February 14, 2015. She was the loving wife of Neil McNamara for 62 years, and the dear mother of Paul (Rose), Kerry (Janis), and Daniel (Laura). Loving grandmother to Colleen, Kate, Lorena, Jaren and Joel, and great- grandmother to Ellie. Bernadette is predeceased by her parents Julia & Peter Tochor of Esterhazy, Saskatchewan, and by sisters Margaret, Clara, Patricia, and Evelyn (husband Frank Green deceased); and by brothers Walter and Ronald. She is survived by her sister Ethel (husband Charlie Cox deceased), and by brothers Richard (wife Ronalda, deceased) and Jerome (Pauline). Bernadette left Esterhazy, SK when she was 17 and traveled to Ontario in search of employment. She had many relatives in Welland and Niagara Falls, and stayed with her sister Ethel and her family. Bernadette quickly found work as a waitress, and as a cashier at an A&P supermarket. This is where she met Neil McNamara, who also worked at the A&P. They were married in 1952. Bernadette was a devoted wife, and a loving mother. She loved taking care of their home in Ancaster and was a master of cooking and baking. Her sons have great memories of coming home from school to warm cookies. She also loved tending her garden and caring for her dogs. Bernadette was active in St. Ann’s parish as treasurer of the Catholic Women’s League and as a member of the choir. She was also a volunteer at St. Joseph’s Villa and St. Joseph’s Hospital.  Bernadette and Neil were avid campers and toured Canada and the United States with their trailer. They also enjoyed exploring Europe, the Caribbean islands and Mexico. Throughout her life Bernadette enjoyed playing cards, especially euchre. Bernadette and Neil were members of several card clubs in their retirement years and they also spent many years square dancing. Special thanks go to the staff of St. Joseph’s Villa for their continuing care of Bernadette. The Visitation will be held at Cattel, Eaton & Chambers Funeral Home at 53 Main Street, Dundas, ON, from 3-5 and 7-9 pm on Monday, February 23, 2015. The funeral Mass will take place at ST. ANN’S CHURCH in Ancaster on Tuesday, February 24, 2015 at 11:00 am, with reception to follow at St. Ann’s Church Hall. Burial will take place after the reception, at St. Augustine’s Cemetery, 65 East Street South (off South Street) in Dundas. In lieu of flowers, sympathy may be expressed through donations to St. Joseph’s Villa.