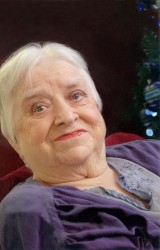 Ciraolo, Frances Marie – It is with great sadness that we announce the passing of a wife, mother, grandmother, and great grandmother. Frances Ciraolo in her 88th year, at St. Joseph’s Hospital on January 31, 2015. Survived by husband Nicholas, and children Charles, Edward (Brenda), Linda (Lee), Joseph (Lorna), Philip (Glenna) and Maryann (Charles). Also, survived by 18 grandchildren and 20 great grandchildren, Predeceased by her brother Sidney Hayes and his wife Margerie Hayes. Friends will be received by the family on Wednesday afternoon and evening from 2-4 & from 6 until the Service for Frances at 7 p.m. at the Cattel, Eaton & Chambers Funeral Home, 53 Main Street, Dundas. Cremation to follow. Expressions of Sympathy to a charity of your choice would be appreciated by the family.