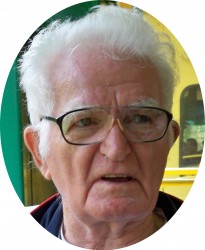 Lethbridge, Roy – November 1, 1929 – December 31, 2014, in his 86th year, Roy passed away peacefully in his sleep at Hamilton General Hospital. A loving husband to his late wife of 59 years, Lorna (nee Pounder, 2010), a proud father to his three children Sharon, Rick and Suzanne. Adoring and adored Grandfather to Tim, Jesse and Chelsea, and great-grandchildren Katelyn and her little brother (due February 2015). Much loved by many nieces, nephews, relatives, close family friends and friends from afar. Predeceased by his older brother Harold, older brother Ken and younger brother Barry. Roy will be sorely missed by his family, friends and co-workers he met during his 43 years at Gillies-Guy and his home life of 60+ years in Greensville. He was a kind hearted, honest, hardworking man who would do anything for anybody. He loved the north country and his second home on Deer Lake in South River. He volunteered for the Red Cross for many years after his retirement. Roy could put a smile on anybody’s face and made friends with everybody he met. To celebrate his life, friends will be received by the family on Friday afternoon from 12:00 noon until the time of Roy’s Service at 1:00 p.m. at the Cattel, Eaton & Chambers Funeral Home, 53 Main Street, Dundas. Cremation has taken place. Interment at White Chapel Memorial Gardens. In lieu of flowers the family would appreciate donation to the Red Cross or the Hamilton/Burlington SPCA in honour of his memory.