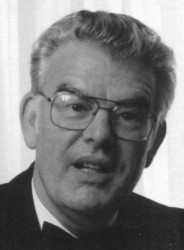 Jim passed away on Monday December 22, 2014 at the Hamilton General Hospital, at the age of 86 years, after a long struggle with the many problems related to sleep apnoea. He is lovingly remembered by wife Betty (Moffat, Angold), daughter Anne (Kevin Jones) and their daughter Laura, son John and his sons Max and Spencer, stepson Alan Angold (Cari), and their children Jordan (Lee), Brittany, Hayley and Zachary. Also missed by sister Mary Hunt, brothers-in-law Don Moffat (Jane), Bill Moffat (Judi), Ian Moffat and several nieces and nephews. Predeceased by his parents Thelma and Gordon Bechtel, sisters Isobel Butcher, Jean Kelly, and brothers-in-law Jim Butcher, Bruce Hunt and Chuck Kelly.  Jim was a valued employee for many years at Proctor and Gamble. During that time he also pursued a career in singing.  Formal training began at an early age and he advanced to study with Celia Bizony, George Lambert and Dr. Gladys Whitehead.  His magnificent voice was enjoyed by audiences in Hamilton, across Canada, in the UK and France.  He was a leading interpreter of oratorical music in Canada and was also in demand as a recitalist.  Jim was the bass baritone soloist at Melrose United Church for over forty years.  He was a regular and favourite soloist at the Bach Elgar Choral Society, The John Laing Singers, Musica Gloria, Te Deum Concerts and the Hamilton Philharmonic Orchestra.  Considered to be the leading bass soloist in Hamilton, he was much loved and admired by his fellow performers.  Other interests included woodworking, making beautiful furniture and toys, renovating family homes, volunteering, travelling with Betty and with choirs.  He endeared himself to many with his warmth, caring, friendly charm, wit, and his rotten puns.  Cremation has taken place.  In the spring we hope to celebrate Jim’s life with a musical gathering.  This will be announced in the paper prior to the event.