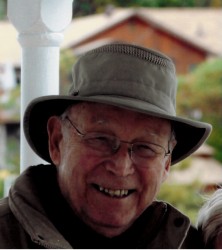 Aylward, Henry Albert – Passed away peacefully in his 94th year at St. Joseph’s Villa. Beloved husband and soul mate of Joyce (nee Easton) for 66 years. Will be sadly missed and forever remembered by loving children, Barbara William (Elko), Gary Aylward (Jill), and Katharine Miya, and grandchildren, Chelsea, Thaddeus and Samantha (predeceased), and Renee William, and great grandchild, Callum. He was a dedicated Canada Post letter carrier for 32 years. But he loved & shared his gift of music throughout his life. During his overseas military service in World War II , he was a gunner in the tank corps, and the solo trumpet player for the “4” Repatriation Band; bringing joy and respite to countless soldiers stationed in Britain. Harry was a member of many area military bands including the Arygle & Sutherland Highlanders, the R.H.L.I Band, The H.M.C.S. Star band, Hindukush Grotto, and Lorne Scots Military Band.  He was most proud to be handed the baton to conduct The Hamilton Frontiersman Band for several years. He was a well known area musician playing nightly in the “hot spots” of Hamilton. He was a life member of the Hamilton Musicians Guild. He was also a fifty year member of St. Columba Presbyterian Church, serving as an elder, on the Board of Managers, and in the choir, and most recently a member of Knox Presbyterian Church in Dundas. His last few years he sang in the Thursday Afternoon Singers. Special heartfelt thank you to the staff of St. Joseph’s Villa, Willow Grove, and the many dear friends and relatives who supported Harry and Joyce throughout the years. Friends will be received by the family on Thursday afternoon from 1 until the Service for Henry at 2 o’clock at KNOX PRESBYTERIAN CHURCH, 23 Melville Street, Dundas. Cremation to follow. In lieu of flowers, a donation to a charity of your choice would be appreciated.