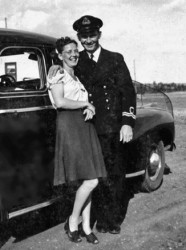 Rowbotham, Georgie Emma (née Stone). Passed away peacefully in her sleep, at the age of 96, on September 29, 2014 at St. Joseph’s Villa, Dundas.  Beloved wife of Bill Rowbotham (d. 1983) and mother of Willie (b. 1947) and Deborah (b. 1950).  Georgie was born in 1918, on a farm near Strongfield Saskatchewan to Theresa and Peter Stone.  The second of ten children, she was predeceased by sisters Verna and Edna and brothers Gordon, Gerald and Lloyd.  She is survived by sisters Ruth, Marjorie and Maureen and by her brother Jim (and Nora) along with numerous cousins, nieces and nephews. As a young girl she played baseball and curled.  Georgie, along with her sister Verna, avidly listened to the radio to get the lyrics of the latest songs so that she could play them on the piano at the next dance.  She left school at sixteen and, having played a major role in the upbringing of her younger siblings, began working as mother’s help for a number of different families.  While she was with one of these she met her future husband Bill.  The war intervened, however, and Bill went away to serve in the navy while Georgie and her cousin Marion came to Hamilton to work in war-related industry at Westinghouse.  She and Bill were married in 1946 in Hamilton where Bill had just begun to work at International Harvester.  Her many interests included crocheting, crossword puzzles, bowling and curling but golf was number one.  She was a long time member of Dundas Valley Golf and Curling Club and an active player until her eighty-sixth year.  Our thanks go to the staff at Caroline Place, The Georgian and St. Josephs Villa for their kind attention and care over the past two years.  Cremation has taken place and, in accordance with her wishes, there will be no funeral ceremony.  In lieu of flowers donations should be sent to the McMaster Children’s Hospital.