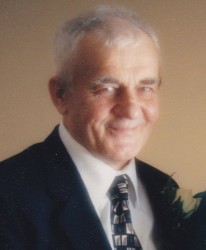 Orct, Lloyd –  With sad hearts, we announce that Lloyd has left us on August 29 at the age of 83 with his loved ones at his side.  He will be sadly missed by his family; his wife of 57 years, Ann (Zitta) Orct, three children; son, John Orct, daughter, Barb (Gord) Smith, son, William (Milena) Orct; four  grandchildren, Lloyd and Matthew Smith and Brandon and Ryan Orct; brother, John (Gail) Orct; sister-in-law and brother-in-law, Mary and Nick Jurilj, along with numerous nieces and nephews.  Lloyd was predeceased by his parents, Victor and Mary (Simeta) Orct. He loved his family dearly and cherished his farm life-style where he was master of his own destiny.  He was a generous man, always ready to assist anyone in need. The family would like to thank Father Robert Love for his prayers and Dr. Gideon and PSW for their compassionate care.  Friends will be received by the family on Monday afternoon and evening, September 1,  from 2-4 and 7-9 at the Cattel, Eaton & Chambers Funeral Home, 53 Main Street, Dundas.  A Funeral Mass will be celebrated on Tuesday, September 2 at 10 a.m. at ST. AUGUSTINE’S CHURCH, 58 Sydenham Street, Dundas.  Interment will follow at Holy Cross Cemetery, 620 Governor’s Road (#99 Highway 4km west of #24), Paris.  In lieu of flowers, donations in Lloyd’s memory can be made to the Juravinski Cancer Centre.