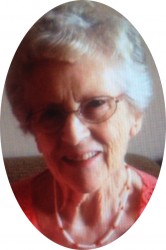 CAMPBELL, Mary (Maureen) Buchan Young – Passed away peacefully surrounded by family in Dundas, Ontario on August 15th, 2014 at the age of 81. Predeceased by her loving husband Bernard Alexander Campbell and survived by their six children, Christopher (Michelle), Ian (Gail), David (Nicola), Catharine (Rob Lassman), Patricia (Tracy Jones), and Sheila (Magnus Persson). Proud Grandmother of Kristy (Jon), Bridget (Tom), Abby (Dave), Alex (Ivonne), Kevin, Carla, Dawson, Katie, Derek, Glenn, Albert and Louie. Great Grandmother to Ethan, Paige, Alexis, Bryce, Kayden and Ava. Maureen shared a loving bond with her brother and sisters and their families in England and Canada: John (Eileen, James, Anne, Johnny), Nora (Don, Margaret, Mary) and Margaret (Scott, Chloe, Ruth).  Maureen was born in Stafford England in 1933, where she grew up and studied to become an   X-Ray Technologist. She also met Bernard, her husband to be in Stafford while he was studying to become an Electrical Engineer.  They boarded the HMS Scythia immediately after their marriage in 1956, and set sail for Canada where they raised and adored their six children.  Long term resident of Dundas, devoted member of St. Augustine’s Church and the Catholic Women’s League. In recent years, Maureen was actively involved as a volunteer at St. Joseph’s Villa. Maureen’s kind nature, selfless spirit and willingness to help others made everyone she met feel special and cared for. Friends and extended family will be received on Monday August 18th at the Cattel, Eaton & Chambers Funeral Home, 53 Main Street, Dundas from 2-4 pm & 6-8 pm. A Funeral Mass will be held on Tuesday, August 19th 10:00 am at ST. AUGUSTINE’S CHURCH, 58 Sydenham Street, in Dundas, Ontario. Cremation has taken place.  Maureen will be dearly missed by family and friends and she will be remembered for her quiet strength, sense of humour and her loving devotion to friends and family. She will be interred at a private ceremony at Victoria Lawn Cemetery in St. Catharines, Ontario, with her husband Bernard and his parents in their final resting place. Memorial donations may be made in lieu of flowers to the St. Joseph’s Villa Foundation, in Dundas, Ontario, or to a charity of your choice.